Welcome to the Ejet blog

Wecome to the Englishjet blog!

This is a space where you can read not just about languages in all its shapes and sizes, and their changing effects and influence on the world, but also about events, reviews, and happenings that might be interesting for you. Here, hopefully, we will have interesting pieces for everybody. So let’s get started!

Let’s start with a review of a popular TV show….

WHAT WE DO IN THE SHADOWS

Do you love vampires? How about comedy? If you’re looking for a great show, then this is a hilarious way to spend 30 minutes.

The show is a mockumentary, a fake documentary. Unlike a real documentary, there’s a script, actors, and lots of plot twists! The show follows a group of vampire housemates through their daily lives in Staten Island, NY. Their house is full of gothic antiques, red curtains and occasionally, a dead body! The vampires have been living together for over a hundred years and are still trying to figure out how to blend into modern society.

Each episode focuses on the misadventures of the vampires and their human helpers. The vampires, Lazlo, Nadja, Nandor and Colin Robinson are always up to something, breaking their human neighbors’ rules and even getting into trouble with the vampire council.

Normally, vampire movies and TV shows are all blood and guts and are very scary. What We Do In The Shadows breaks all the genre expectations. The show is funny and smart with excellent actors and lots of physical comedy. Each character also goes through their own personal journey. In funny and unexpected storylines, the vampires process their feelings of loneliness, isolation and desire.

The actors bring their characters to life with humor and care, you’ll hear a combination of British, American and vampire accents! The costumes are fun and extravagant from Nadja’s voluminous black dresses to Nandor’s warrior cape and boots. Originally aired on the FX channel in the United States, you can watch the show on HBO Spain with subtitles in English to help you catch the jokes!

Do you usually watch movies and TV shows in the original version or dubbed into your language? 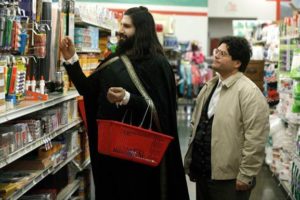 We use cookies on our website to offer you a better user experience by remembering your preferences on future visits. By clicking on "Accept all", you consent to the use of all cookies. However, you can visit "Set cookies " to set which cookies you want to consent to.
Set cookiesAcept all
Manage consent

This website uses cookies to improve your experience while you navigate through the website. Out of these, the cookies that are categorized as necessary are stored on your browser as they are essential for the working of basic functionalities of the website. We also use third-party cookies that help us analyze and understand how you use this website. These cookies will be stored in your browser only with your consent. You also have the option to opt-out of these cookies. But opting out of some of these cookies may affect your browsing experience.
SAVE & ACCEPT